We have a castle in our basement! What, doesn’t everyone?!? 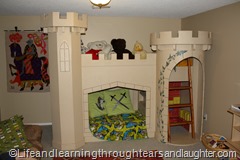 In a prior post I had included a picture of our castle, and I received a few inquiries of how we came to have it. I thought it was time to share that story.

If you’ve read my blog before, you may have read about my son Alexx. Just prior to his 8th birthday, he was diagnosed with a rare and terminal cancer. In the months following, I was truly amazed and blessed by the community support we received. One organization providing support was Wishing Star.

Wishing Star is an organization that grants wishes to children, in areas of Washington and Idaho, with life threatening illnesses. Alexx was referred to them and we were called for a wish interview.

Like almost every boy, Alexx was fascinated with cars and trucks. He especially liked monster trucks. Back in early 2000 there was a show called Monster House. A crazy crew of builders would turn a normal looking home into something quite unique. The creativity always seemed to involve portions of cars. Alexx wanted a monster truck themed, monster house. I offered him the basement. The dear sweet lady that conducted his initial wish interview had clearly never seen the show. In fact she was so confused she thought he wanted a monster truck themed bedroom and began talking about window and bed covers.

With much consideration, Alexx agreed to give up his huge monster truck ideas in trade for medieval dreams of castles and knights. Inspired by a picture from a magazine, gifted Wishing Star volunteers painted a mural, built a castle and turned a basement family room into a young boys play area. He even had a special table where he displayed his toy monster trucks.

Throughout the ten month cancer battle, we were touched by many community programs and volunteers. From noticing the brilliantly cheerful colors of the amazingly crafted quilts during our first hospital stay, to the simple toys in the “poke box” that were earned for each needle poke it took to gain a blood draw, I felt support.

During those ten months, my son went through radiation treatment, blood draws, pediatric physical therapy, and so much more. We were supported by friends, neighbors, medical staff, and so many volunteers and donors that we are unaware of. Also during those ten months Alexx attended camp Goodtimes, met many new friends, shared his unshakable faith, and so very, very much more. A single blog post could never hold all of the memories, tears and laughter, of that ten month season.

Today is the anniversary of my son stepping into eternity. I want to encourage you to consider how to impact your community. Regardless if the cause is childhood cancer, or something close to your own heart, get involved!

With young kids, I often feel challenged on how to get involved. Many organizations need financial support, if that is something you are able to do. A servant’s heart can be developed at a young age with activities as simple as volunteering as a family. Volunteer to help clean your church, visit a nursing home, bake cookies for an elderly neighbor, volunteer at an animal shelter, etc. Get your children involved. Demonstrate, by example, how to get involved. Most importantly, pray with your children! Pray about the causes that burden your hearts.

Although the original mural is gone, our basement still houses the castle. For the littles it serves as a kind of inheritance. They grieve a relationship lost. The brother they never knew. They have a castle, they have stories shared…

I am listing links of organizations that impacted our family directly, and indirectly.

How do you get your family involved in your community?