Does God ever whisper in your ear and tell you of things to come? Last Sunday morning I was praying with a weekly prayer group. We meet during one of our church’s services and pray for those attending, the pastor, and the week ahead. On this Sunday, one individual began to pray for those who would lose a family member during the holiday season.

As the prayer was spoken, I considered my own mother. She is aging and I knew it would not be too many more years before I would be faced with loss. As my mind wandered, I thought I heard a faint whisper. A softness even.

With Christmas fast approaching, my relaxed preparations were beginning to feel incomplete. A small shopping list, cookies to bake, some extended family to arrive, and gifts to be wrapped.

During a phone call, I was thankful to confirm that my mother’s Christmas presents had arrived. I was concerned to learn she was sick and not feeling well. She had been sick before, so I initially passed off my concern. Her caregiver seemed agreeable when I shared my plan of visiting at the coming weekend. Although I did not have peace, I chose to ignore it. Tomorrow was Christmas eve after all. 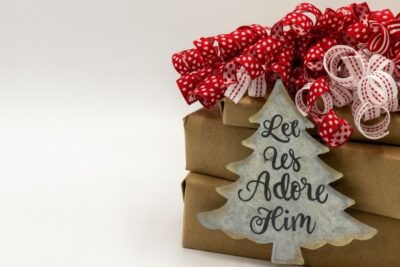 Later that evening, I was startled by a knock at my door. We were not expecting company so I assumed it was a neighbor. Instead, I was greeted by an unfamiliar man. He had a warm smile that felt comforting. I kept staring at him searching for something familiar. He pushed a stack of packages into my hands and with a quick glance, I saw my daughter’s name on the top box.

The man explained he was an elf helper for secret santa. I assured him we had not signed up for anything and there must be a mistake. He just continued to smile and said he had to go back to his truck, as there was another item too large to carry with the rest. When he returned my husband was by my side. The man was carrying a stuffed moose larger than the three children put together. Despite our inquiries, he would only say the gifts were from secret santa.

While the kids enjoyed the giant stuffed moose, I looked at the stack of gifts. Not wrapped in paper with images of santa or reindeer, but paper with scripture speaking of Jesus. 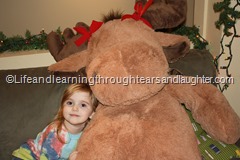 As the evening progressed, I thought of and prayed for my mom. I could no longer ignore that absence of peace and prayed for God’s direction. I felt I was to make the long drive to see her the next morning but was concerned about all I felt I needed to finish on Christmas eve. I heard a voice so clear that it felt audible. “I just had presents delivered to your door. I’ve got this.” Finally letting go of my plans and expectations, I had peace.

At the end of my near four-hour drive, I found my mom sick and resting. By mid visit, she was responding enough that I did not feel I needed to use the overnight bag I had brought. My accusation that she just wanted me to visit for Christmas brought a big smile to her face.

After a long drive home, I enjoyed reading my kids a bedtime story of The Christmas Miracle of Jonathan Toomley.  Over some late-night present wrapping, I kept considering the story I had read. A man gloomy from grief, and yet gently reminded of the joy in being in the presence of Jesus.

Christmas morning was precious. The kids dug through the treasures in their stockings while sleepy adults waited for brewing coffee. Following a prayer of thanksgiving, presents were passed out. My own gifts waited as I watched my children delight in each present. They would squeal with excitement and call out to their siblings while holding up the new treasure. The opening of a gift would be paused to see what the other had received and excitement was shared. Well, all except underwear.

Once Christmas morning was concluded, breakfast eaten, and I was dressed and ready for the day, the phone rang. My overnight bag was quickly repacked, and I returned to the road. By the time I could reach my mother, she was at the hospital surrounded by my sister and other family. She was in organ failure.

Although thankful for the presence of family, I cherished the quiet time I had alone with mom at night. She wasn’t able to directly communicate with me, but I knew she heard me. I talked to her. I told her I loved her. I told her it was okay to go spend Christmas with Jesus. I read to her. We began with Luke and the birth of Jesus. It was Christmas after all.

The morning after Christmas I was stiff from the hard hospital guest bed. I opened mom’s room curtain to bright sunshine. The sky was perfectly clear with the exception of a small X where two planes must have crossed in the sky. I was filled with peace.

I remained at the hospital with my mom for two nights. By day there was also family around, and by night mom and I were alone. I continued to read to her. I assured her that she could go home. I told her she had done a good job raising her daughters, and we would remember her lessons. By the third evening, my husband called insisting I get a room. My sister, who had offered before, was more than ready to spend the night.

When I prepared to leave the hospital, I knew it would be the last time I would see my mom alive. I spoke to her one last time and kissed her goodbye. I felt peace. A softness even. 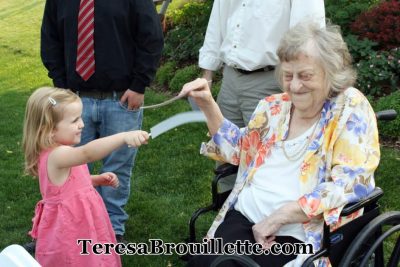