If you read part one of this story, you know that my son Alexx faced cancer while in the company of angels. A trinket, a coin-sized piece of metal that held the image of an angel, served as a reminder to him of God’s provision. Eventually, we took the trinket out of his treasure box, and that is where this story continues. 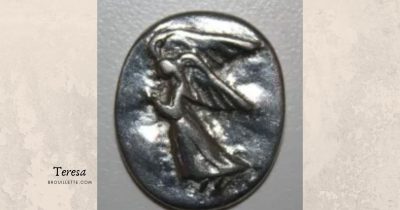 Alexx was diagnosed with terminal cancer toward the end of 2003. Our country was engaged in a middle eastern war. At 8 years old we did limit his access to information, but news of conflict, terrorism, and military actions was all over the television stations. We had family and friends in the military. For Alexx, that made it personal.

I had a coworker and friend that was a reservist. Her husband was full-time Navy, and most importantly to Alexx, her son was his friend. It did not matter that we no longer lived in the same community or saw them often, they were soldiers for our country and his friend was HIS FRIEND!

At the time the news of Alexx’s health was shared with friends and family, my friend’s husband was out on a Naval ship. We were quite simply overwhelmed with appreciation when he mailed Alexx cards of encouragement that were signed by so many of his shipmates. No longer did Alexx pray generically for our troops, he had names to specifically lift up in prayer.

The well-wishes the troops sent to a little boy going through cancer treatment were divinely turned into very specific and powerful prayers.
Click to Tweet

After completing radiation treatment, Alexx improved. The tumor had shrunk from treatment and he was feeling almost like his old self again. He enjoyed time with friends and family, summer camp, and many activities that every 8-year-old boy should experience.

By mid-summer Alexx began to again stumble, his speech slurred and he was tired. The tumor was growing. While continually praying for a miracle, we treasured every precious moment. Through it all, times of feeling good, and times of illness, he remained a little prayer warrior.

When Alexx and I prayed together, we would take turns lifting up our hearts to God. One day he just wanted me to pray. I thought he was just tired, so agreed. His speech had become so slurred that I often could not understand him. The next time we prayed, he again just wanted me to pray. When I asked why he became upset and confessed that he was frustrated that his words could not be understood.

God hears the prayers of our hearts. He can read our thoughts. He could understand the slurred words and mumbles of a boy. I explained that to Alexx, and he seemed relieved. He began to pray again, and when he was done, we agreed he would squeeze my hand so I would know it was my turn.

I did not need to hear the words of his prayers. I had heard them before. I knew his heart. “Jesus I pray you will take away the bump in my brain and make me better. If you want to heal me in heaven, that’s okay too. Jesus, please watch over our soldiers. Help them not to be afraid and to know You are there. Send Your angels to watch over them. Jesus, I heard some of my friends are scared for me. Help them not to be scared. I know I’ll go to heaven. I pray they know You so they will one day be there too.”

We took Alexx’s angel out of his treasure box one day. My friend was being deployed. I told her the story of Alexx holding the hand of an angel. I knew the small piece of metal could not protect her, but it could serve as a reminder of God’s protection. I told her she had to bring it back to me in person, and I held her in prayer.

When I saw her again, she didn’t have the angel with her. She told me that she had carried it the entire time she was overseas. I suggested she keep it in case she was deployed again, or to pass it on to another soldier and tell them what it represented.

I’m not sure what I will do with the angel my husband gave me. Maybe it will go to a soldier or friend. Wherever it goes, it will come with the story of how one night a little boy was attended by an angel.