The beginning of a new year marks the end of our holiday break. Is anyone experiencing resistance in resuming a back to school routine??

I have to admit, the resistance in our house is not only from the littles. With the turn our holiday took, I’m struggling to get back into a routine.

Having made no plan for the post holiday back to school blues, and experiencing grumbles and even tears this week, by Friday I ignored the lesson plan and was ready to wing it. 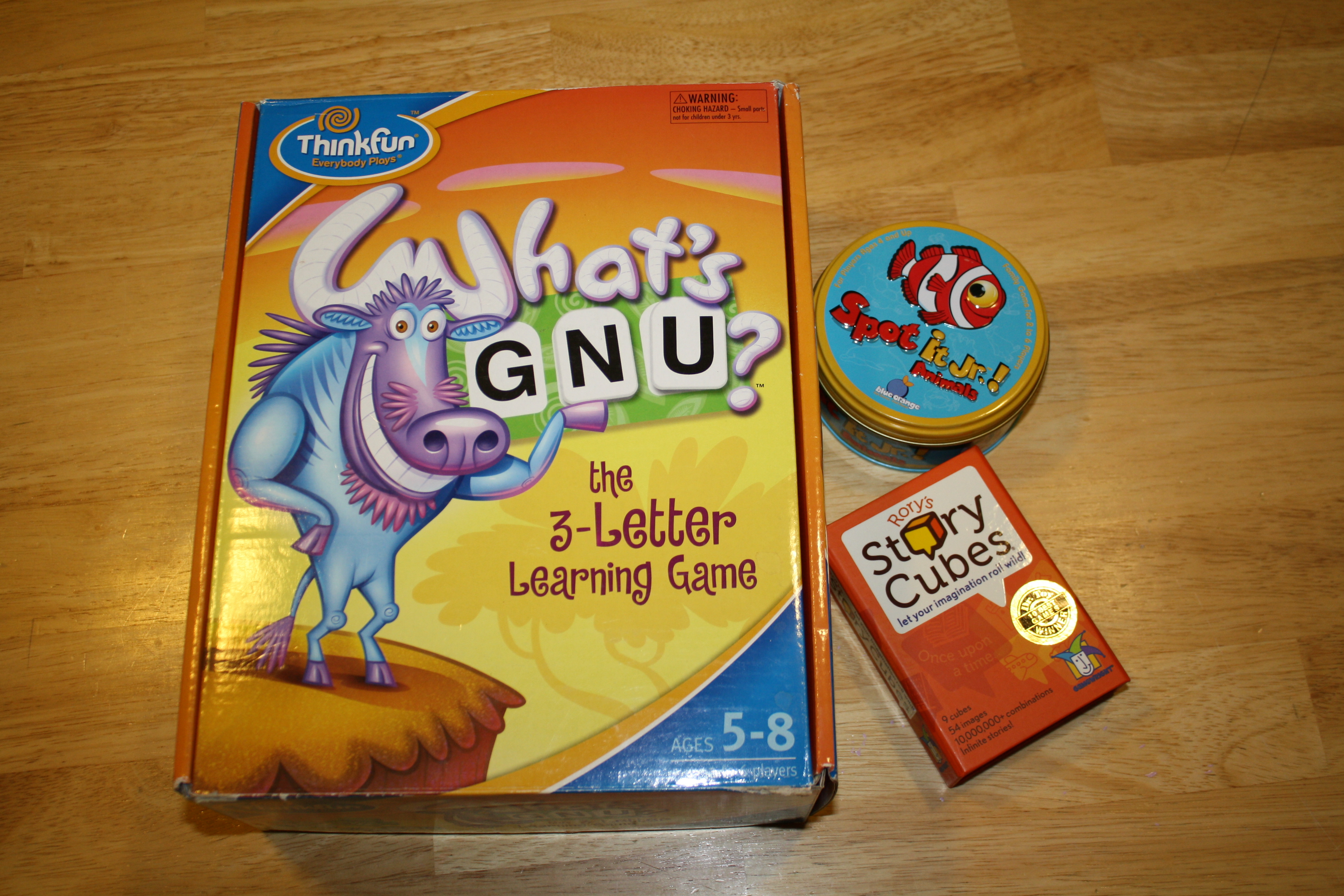 The littles were surprised, and thrilled, to find I had declared it a game day. We began with Spot it Jr. There are several ways to play the game, but however you choose a sharp eye and quick reaction time is a must. When we first got the game we were concerned that Little Bear might struggle to keep up. Instead, she is often the winner, and today was no exception. 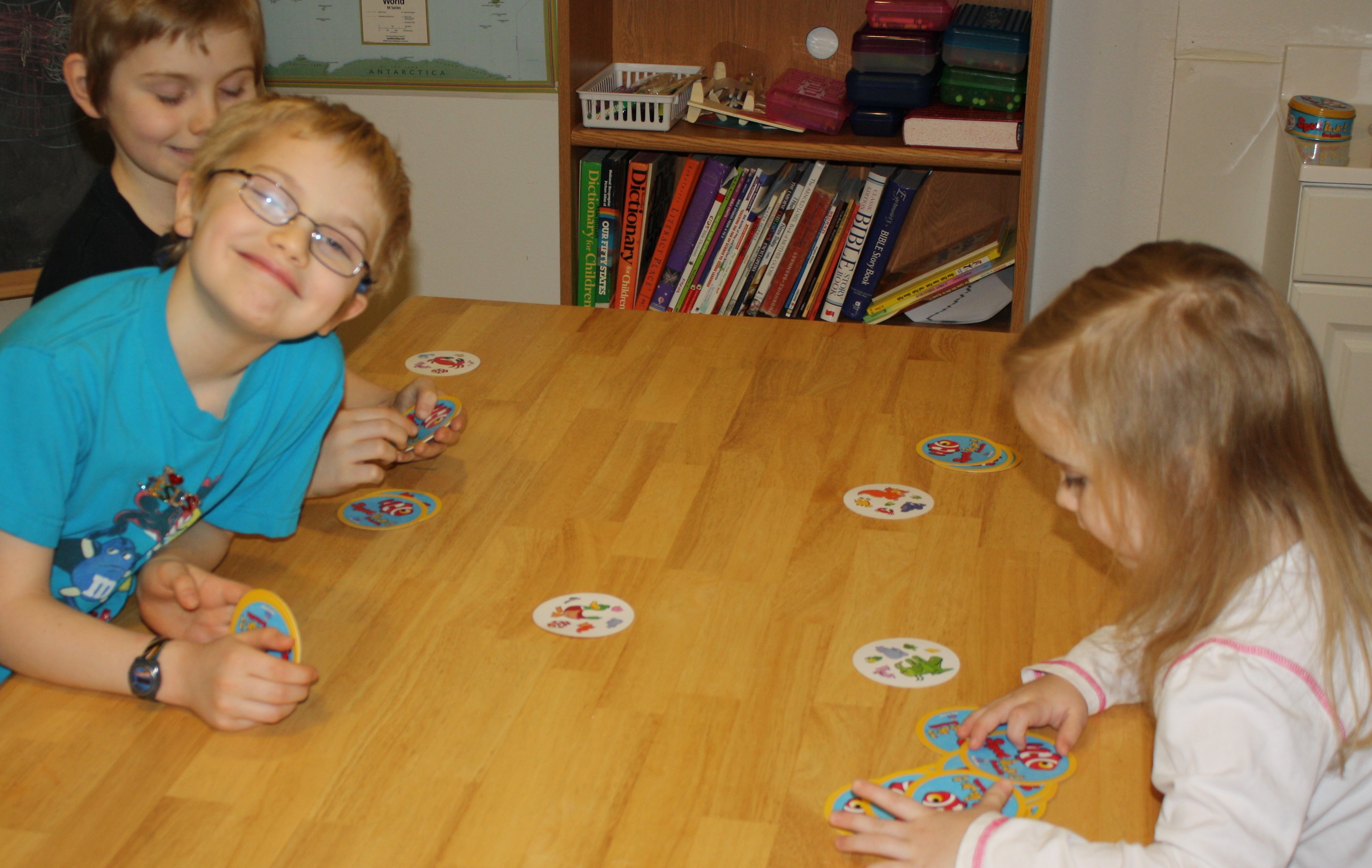 We played a couple of rounds of Rory’s Story Cubes with the ‘once upon a time’ version. This is a great game to inspire creativity and literacy development. We played the game together by dividing the cubes. Each person took a turn adding to the story based on an image on one of their cubes. We continued in a circle until we were out of cubes. The littles had to listen carefully to each other to creatively add at their turn. At the end of each round, we had a fun and silly story. 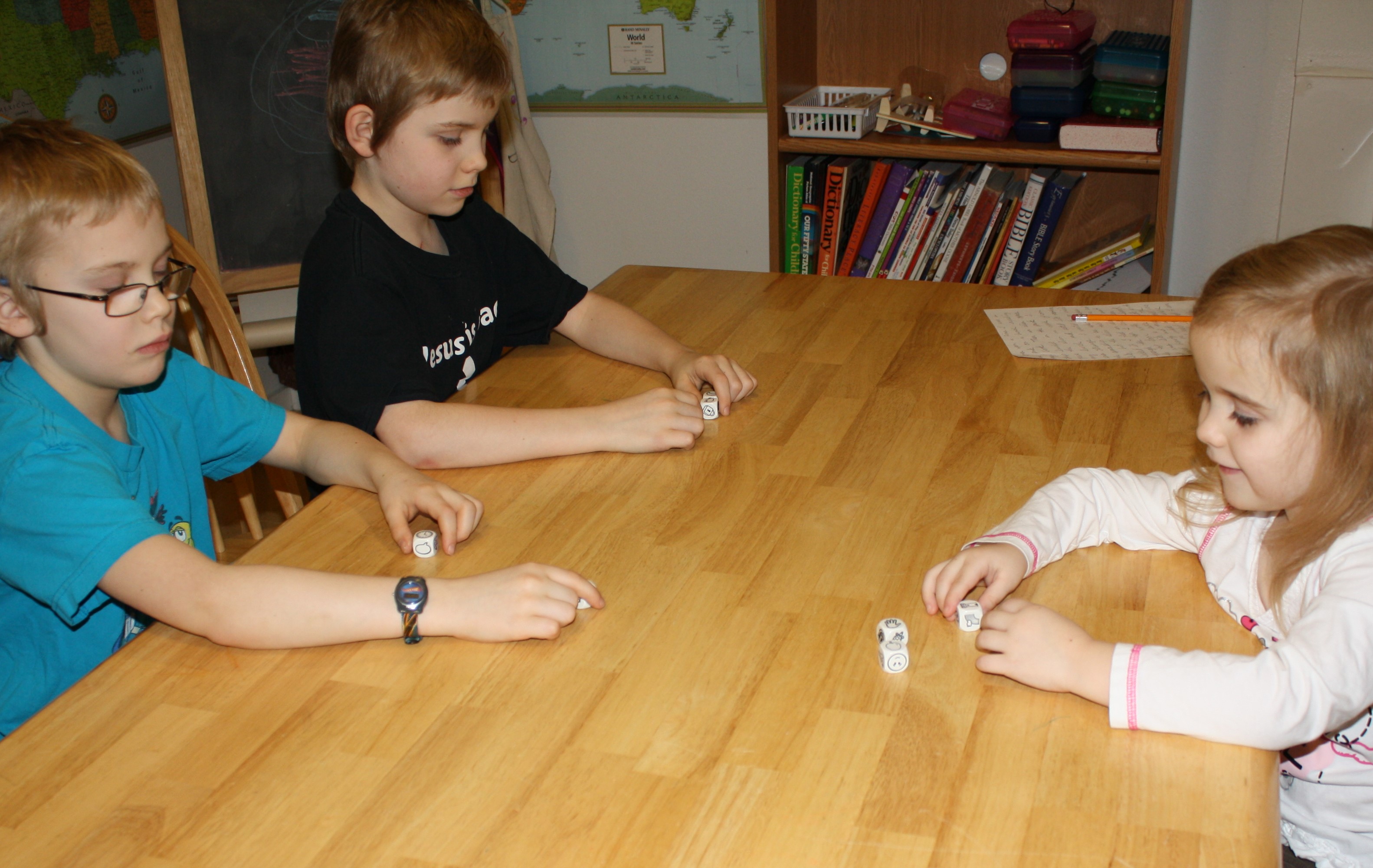 Our final game was What’s GNU? (Update: this game from ThinkFun is no longer available under this name. There is a very similar game by this company called Zingo) This is a great game to encourage simple spelling and letter recognition and sounds.

We played a non-competitive round….well, sort of. The boys were on one team, and Little Bear and I on the other. Each player drew five-word cards, as it seemed too overwhelming to have them all laid out as the game directions suggested.

At each turn, the team slid the letter stand and tried to use the letters to build a word using one of their ten-word cards. If they could not build a word they would pass and the other team could try using the letters. If there was no word option, the letters went into a “trade” spot to be used later by either team to avoid a “pass.” This continued until all the word cards were used. 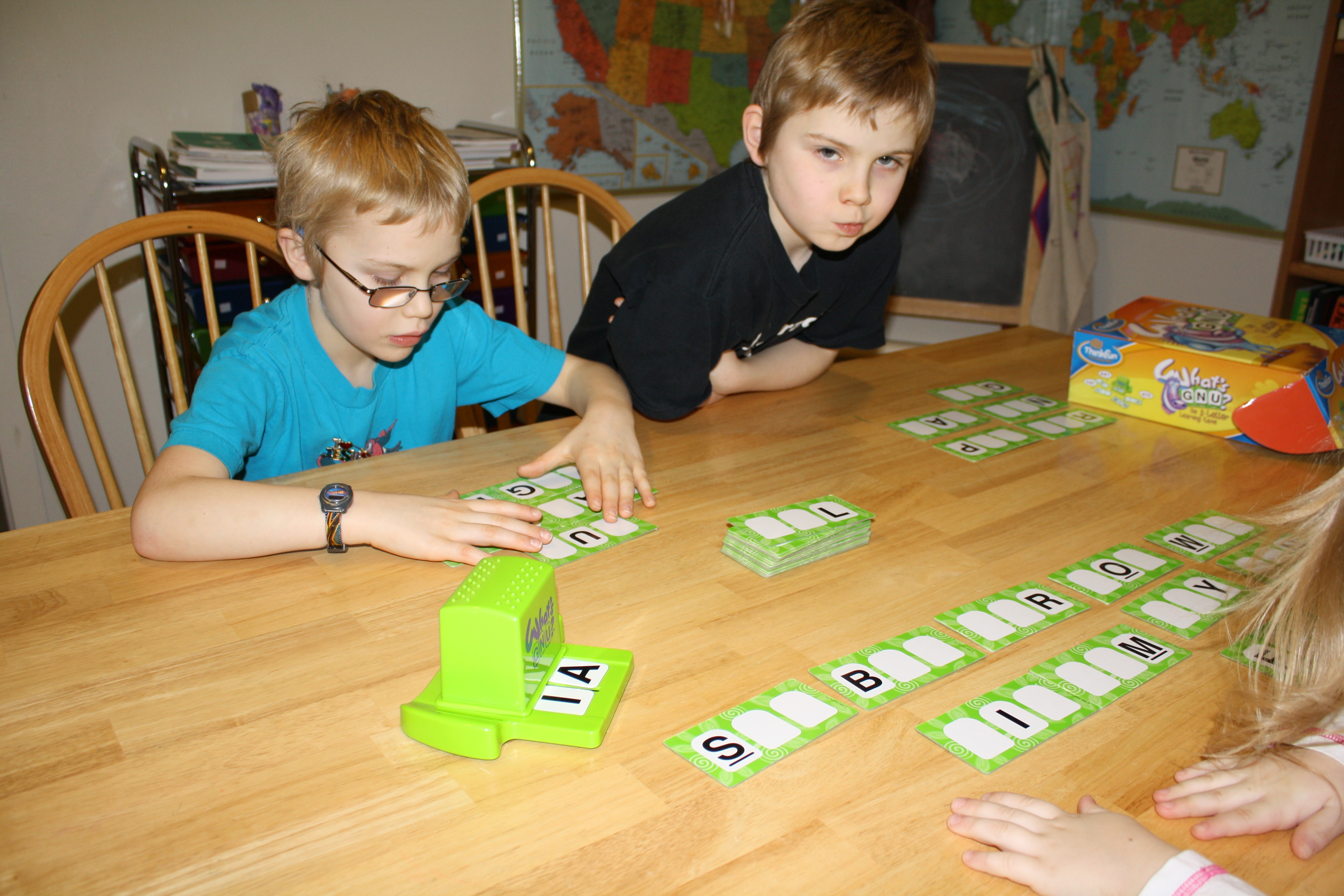 This was a great game for Columbo and Magoo to practice teamwork. Little Bear teamed with me by sounding out each letter after I built a word. It was fun to play the game in a way that spanned the age gap of the littles.

In case your curious, Little Bear and I had the most words. Columbo even pulled out a dictionary in an effort to verify my veto of how to spell a word. 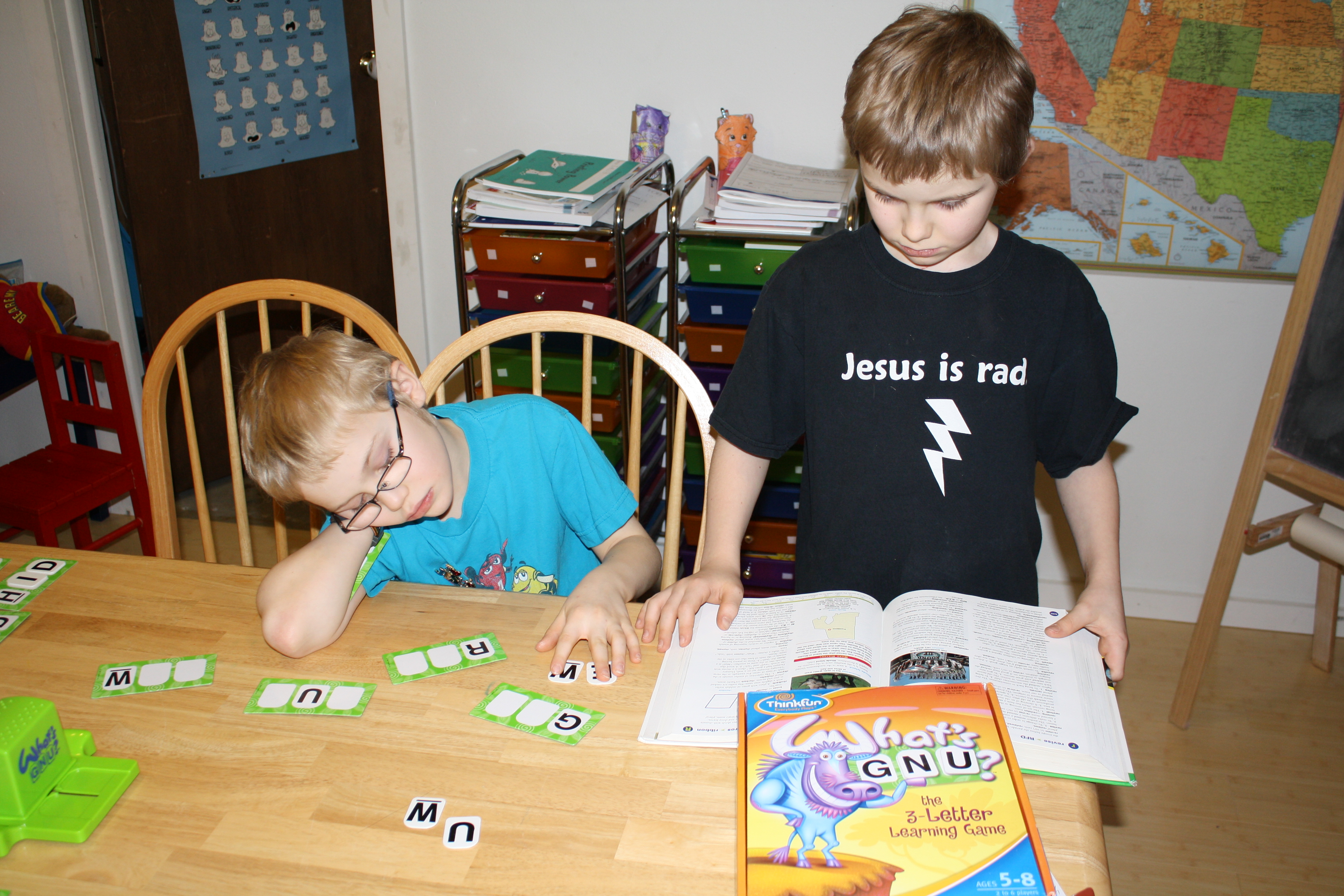 The best part of our game day was the laughter. We had fun together while playing games that promoted learning and creativity. I can see Friday Game Day hitting the lesson plan again!!