Spring seems to have finally arrived. The sun is shining and the temperature is slowly rising. The littles have been so excited to be able to play outside, they often forget there is still school work to be completed. Unfortunately school work is not the only thing they have forgotten. Yes, we have been hit with the ever infectious Spring Fever!

I admit I’ve voluntarily given the littles extra time outside. Their store of bottled up winter energy is best spent outside. Unfortunately the explosion of energy has resulted in disagreements and squabbling.

Recently the littles were disagreeing over how three of them would utilize the two favorite swings in our yard. I know this in detail because a very upset Little Bear filled me in on how she was denied her right to swing. She added a bit of her own dramatic flair for impact.

Although my patience was exhausted and I really wanted to raise my voice and tell them to get along, we were in the backyard. I seem to be able to engage restraint more quickly when I think the neighbors might hear. I chose instead to call the littles together for a quiet discussion about turn taking and treating each other with kindness. I attempted to remind them, and myself, of the fruits of the spirit being kindness, patience, self-control…. Magoo was quick to interrupt me and rattled off the fruits of the spirit as quickly as he could. He proudly smiled at how he knew them all and could say them quickly. I gently pointed to his head and told him I was pleased that he knew them there. I pointed to his heart and asked him if he understood there. A shrug, a smile, and Magoo told his sister she could have his turn on the swing.

The littles have created an unusual game, that I dare say is not fully mother approved. When one or two of them are swinging, the third will sometimes get a soccer ball and roll it on the ground for the swinger to kick. With only two swings, and Magoo feeling too confident in his ability to exercise the fruits of the spirit, he was quick to grab the ball and be the roller. There was much laughter and kicking among the littles as I cautiously watched. When the ball was missed, Magoo went behind the swing to get it. Unfortunately, as Columbo swung back and tucked his legs to pump higher, his foot came into contact with the side of Magoo’s head. A moment’s pause, an angry cry, and Columbo was struck in the side of his head by a well-aimed ball.

I knew the neighbors couldn’t miss the drama unfolding in our backyard. Columbo loudly declared his innocence and pain while slowly shuffling from the back of the yard and into the house. Little Bear quietly went inside looking thankful that it wasn’t her. Magoo angrily held his head and insisted he was a victim of an intentional offense. 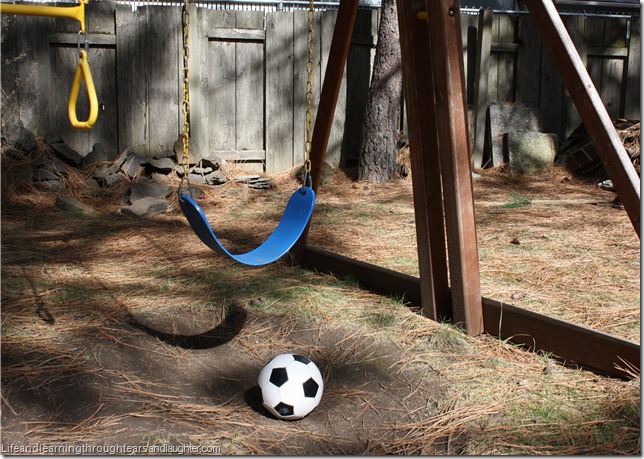 When all injuries were attended, I reasoned with Magoo that his being struck was the fault of his being too close to someone swinging. He knew I was right, but insisted he was just too angry. I gently asked him if that was self-control. I explained to him that it is human nature to become angry after being hurt. What we do with that anger is our choice. Although Magoo and Columbo  eventually extended apologies and words of forgiveness, I was sure there were more teachable moments in this experience.

It was a few days later, during our devotion time, we were discussing how we should live as Christians.

But if we walk in the light, as he is in the light, we have fellowship with one another, and the blood of Jesus, his Son, purifies us from all sin. 1 John 1:7

Knowing that we are all sinners, the littles expressed concern at how we could walk in the light. I suggested we begin with forgiveness.

Tolerating a wrong attitude toward another person causes you to follow the spirit of the devil, no matter how saintly you are. One carnal judgment of another person only serves the purposes of hell in you. Bring it immediately into the light and confess…….if you don’t, your heart will become hardened through and through. ~My Utmost for His Highest, Oswald Chambers

Initially the littles insisted they did not harbor unforgiveness toward anyone. As I reflected back on the incident from the few days prior, hurts began to flair. Although they had dutifully gone through the steps of apologies and spoke the words of forgiveness, they were tolerating wrong attitudes.

There was much discussion before the boys were ready to go before the Lord. When they did, they chose to pray independently. Each acknowledging they had not been aware they were still holding onto hurt and unforgiveness, and this concerned them. We agreed to make a regular prayer time, at least weekly, to ask the Lord to search our hearts.

As laughter again fills my home, and backyard, I am thankful. Although there is still the occasional disagreement, I see the blossoms of fruit in the hearts of the littles.