We have had a wonderful week creating Christmas gifts. The littles have been putting a great deal of thought and time into creating gifts for different family members. I threw in a few suggestions of my own, and we’ve had a crazy fun time!

Our first idea was a set of family memory cards. The idea was inspired by the fact that my mom has dementia and sometimes gets family members mixed up.

Now before you think giving a memory game to a dementia patient is a little twisted, hear me out. Not only do I think we should engage our minds at every stage of life, but my mom has always enjoyed a good card game. Regardless if she plays the game as it’s intended, or just thumbs through looking at the pictures, it’s a new and creative way to put the memories and family faces in front of her.

The boys really enjoyed being involved in making the cards. They were eager to make a second set for Little Bear. Memory games are great fun, so why not step it up with family photos.

Our first step was to order photos. I used my local Costco by ordering photos online and picking them up the same day at the store. Knowing sizing could be an issue, I went with pictures where the subject covered only about half of a standard 4×6 photo. Be sure to order two copies. 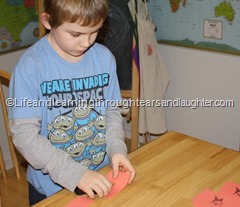 Magoo worked the stamp pad and gave each card a design on the back. 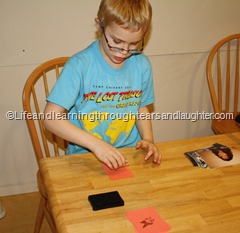 We cut the pictures about 2-3/4×3-3/4 inches, which allowed for room to write names on Grandma’s cards. We didn’t add names to Little Bear’s preschool set.

I lightly used a glue stick to hold the pictures on the cards so they wouldn’t slip going through my lamination machine. If you don’t have a laminator, boxing tape would also work. 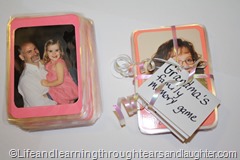 Given Little Bear kept asking to “try out” grandma’s cards, I think she’ll be thrilled to discover her brothers made her a set of her own.

Our second project was photo bookmarks. I saw a picture on Pinterest, but it only led to an image, so I don’t know where to credit the original idea. 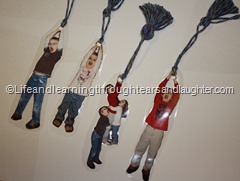 The first step was to take creative pictures. I had the littles pretend they were hanging off a cliff from a rope. They were thrilled to play along and I was in hysterics!!

Once I ordered and picked up my photo prints, I closely cut out the outline of their image (I was supervised to make sure I didn’t cut off any heads or feet).

I ran the kids, I mean their pictures, through the laminator (joking possibilities were abundant here). With the finished cutout piece, I punched a hole where they were “hanging on” and added a bookmark tassel. If you don’t know how to make a tassel, there is a video tutorial here that is similar to how I made mine. If you don’t care about a fancy tassle, simply attach colorful string with a slip knot.

I have found our homemade projects to be a fun way to focus some of the kids’ energy while encouraging the excitement of gift-giving. They are excitedly brainstorming more creative projects.