For months my daughter has asked me to help her find a pen pal. She loves to write and receive letters, and I want to encourage her. Finding a snail mail pen pal isn’t as easy as it used to be. 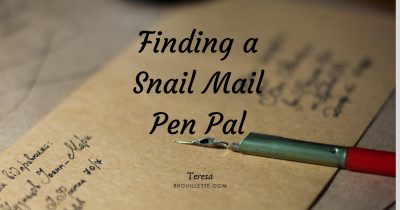 When I was a child, I had a beloved aunt that I corresponded with. She faithfully responded to all my letters. I was so excited when her response arrived, I would immediately gather my stationary and write back.

I enjoyed writing so much, I answered a magazine ad for a pen pal. For several years I shared letters with a girl my age in Pennsylvania. Although letters stopped sometime in our busy high school years, I’ve never forgotten our friendship.

In a world of immediate text messages and emails, I had no idea how to go about finding my daughter a snail mail pen pal. She has friends in other communities, but not everyone shares her interest in letter writing. Most of her cousins are older. I’m not aware of any magazine advertisements as in my childhood, but I don’t feel it wise if they do exist.

How to Write a Letter

Not knowing how to find my daughter a pen pal, I stalled. While playing for time we reviewed letter writing skills with a reminder of the five parts of a standard letter:

Letter writing is a wonderful skill kids should learn. It’s a fun way to practice written communication while developing a relationship with a faraway friend.

I finally decided to take a leap of faith and turned to social media. Using a personal account reaching only friends and family, I asked if anyone knew of a girl also wanting a pen pal.

Several friends shared stories with me about their childhood pen pals. Like me, most lost connection over the years. I was surprised to learn of a family member having a pen pal for decades. As a child, she had obtained the across country contact in a church bulletin. A friendship blossomed with faithful writing. They progressed with technology to email and video chats. They remain devoted friends to this day and take trips to visit each other.

I was overwhelmed with nostalgic stories and the support for my daughter’s letter-writing quest. I was given a few parent contacts. Names and mailing addresses were exchanged in private messages. 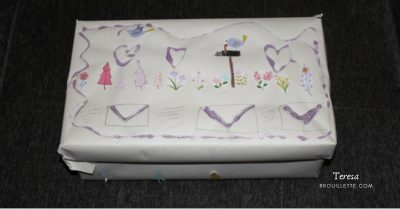 My daughter glows with excitement when receiving a letter. She pours over the message and usually rushes to her room to pen her response. I found an idea for making a letter writing kit to keep her materials organized. She has repurposed an old shoebox by wrapping it in craft paper and decorating it. It contains her stationery, colored pens, address book, and postage stamps.

I don’t know if my daughter will exchange letters for decades with her new pen pals, or if they will fade away with busyness as these girls grow older. For the moment, I hope her new friends are enjoying receiving her letters as much as she is receiving theirs.