Oh boy have I had a week. Can I get real? Parenting is hard work! Dare I say, sometimes being a parent is not very fun!!

Since leaving the world of “working mom” to be a full time homeschool mom, I have perused a number of resources and blogs to get input on what home education is supposed to look like. I’m very visual, so I needed to be able to process the facts and put them into a picture. Despite all of my effort, reality isn’t seeming to measure up.

I’ve been a parent for almost 26 years. (I know, I know, crazy given I’m only 28…it’s that new math. Just go with it…) In that time I’ve had short seasons of being fully at home with my kids, or only working part time. Mostly I was a full time working mom. Not working was never an option. Go to school, get a job….it’s what everyone did, right!?! It’s what was expected. Once babies come along they are sent to daycare. When old enough for school they are enrolled in the local public school so live in a good area, or go private if you can afford it.

When we prayed and made the decision for me to be home full time with the littles, I did not doubt my abilities. No early alarm. Relaxing days playing with the kids. I can catch up on house cleaning. No work pressure or deadlines. Yeah, I know, you stay at home moms are all laughing right now. Please, please, no bon-bon jokes.

I’m sure you all know that my illusion was quickly shattered with reality. Kids are demanding and messy. Not only that, but two of them had a few years of daycare attitudes that had to go! On top of that, I had to figure out what this homeschooling process was supposed to look like. Really, it can’t be that hard, right?!?

Through my transition from working mom to exhausted overworked homeschool mom, I found some routine and a bit of balance in home education and managing a home. I’ve found some wonderful resources online and much encouragement from blogging moms. Although I have noticed that most of the blogging moms have kids perfectly posed in their tasks, houses clean, and speak little or nothing of the challenges of bad child behavior. (I’m sure there are exceptions. I’ve just not really seen them.) 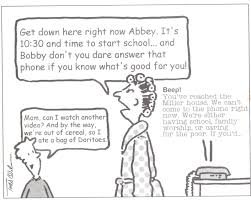 So, again, can I get real?!? My kids can be monsters!! There, I said it. Is their bad behavior okay? NO! Is it approved? NO!! For the last week I’ve been fighting a build up of drama. One hates school. Another doesn’t hate school, but just wants to have “fun” and play. The other goes along with whatever emotion is erupting from one or the other sibling at the moment, and exacerbating the situation. NOBODY is doing their chores….except mom! ALL of them are fighting. In just a few days I went from mom to maid, and parent to feeling like a referee. Can anyone relate? Really, anyone….anyone???? 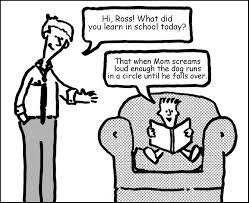 The initial mutiny looked like a problem with incomplete chores. Knowing the littles were trained to do their chores, I simply re-introduced the “Uh-Oh Box.” I love that box!! When toys are not picked up, or when the teething puppy picked them up for me to fish out of her gooey mouth, the item goes into the box. (Cleaned of goo when appropriate!) To get them out of the box, the kids must do a chore. After a week I clean out the box. If it’s not important enough to do a chore for, it’s not needed. ( I got the original idea for the box here. I had made a list of chores I put an envelope on the other side of the box for the littles to draw from. My list is from last summer so some chores are not winter appropriate) 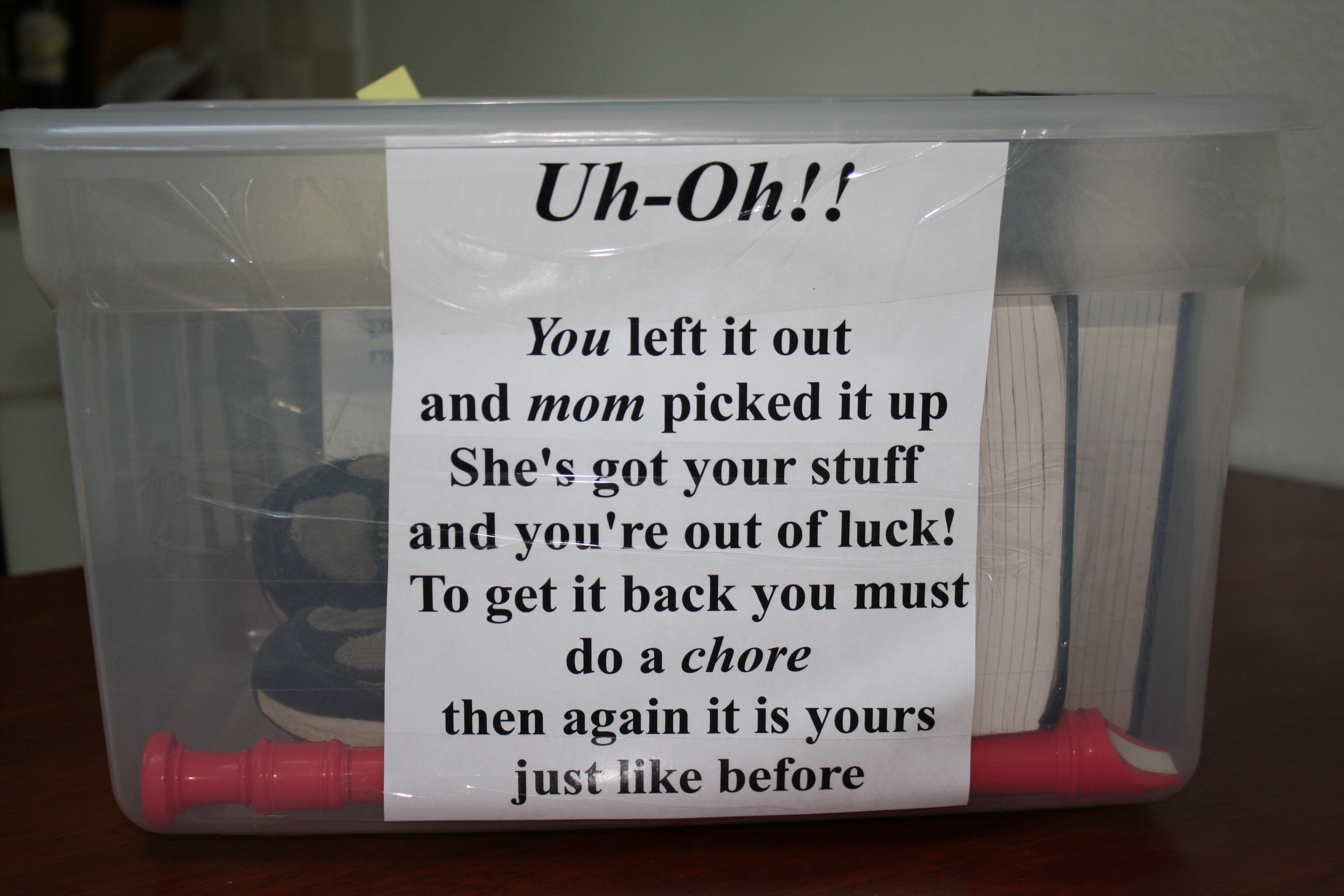 Yesterday our home hit critical mass. Attempting to follow the normal routine of breakfast, morning chores, and school, turned into tears and lamenting over the lack of all things fair, and not enough fun or play. Although only a few days prior I had taken much time for games and fun to try to work on relationships and heart issues, there was still division. Not having family local to quickly call upon, I could not run away for a break of coffee and high quality chocolate (now my tears….). So, I said “Fine!!! You wanna play? Go, play!!” They played, and I went to pray. Keeping an ear on them I threw my weary mothers heart at the feet of the Lord. I knew I needed help. This parenting is tough stuff!!!

After God’s Word, I went to Home Education by Charlotte Mason. I believe in the principles she’s taught, and would consider myself a Charlotte Mason style home educator. That said, my visual learning mind struggles to quickly grasp and apply her depth of wisdom. What I did read and glean from…

“A little child shows some ugly traits-he is greedy, ……he is vindictive…..he tells lies….” (It’s like she’s met my children)

“…..Deal with a child on his first offence, and a grieved look is enough to convict the little transgressor; but let him go on until a habit of wrong-doing is formed, and the cure is a slow one; then the mother has no chance until she has formed in him a contrary habit of well-doing. To laugh at ugly tempers and let them pass because the child is small, is to sow the wind.”

As I have considered those words, and prayed for God’s wisdom, I have taken steps to enforce house rules. Some time ago I had introduced a discipline chart from Confessions Of A Homeschooler. Although I use it just a bit differently then she does, it’s been an effective tool when enforced, and saved me a ton of time creating materials myself. After yesterday’s drama I added her discipline chore cards, and my own reward tickets.  My reward tickets include electronics like computer games, movies, and Wii which have clearly stated time limits. When they want to use a reward they are given a timer.

(Personal Note: When my oldest son was younger,  who is ASD, I made a chore chart very similar to Confessions of a homeschooler’s chore cards. It was very effective. What I made contained only two pockets. Chores to do and chores done. Auditory: “It’s chore time” Visual: He could see what chores needed done. Tactile: He physically moved the card from chore to be done to a place indicating it was complete.)

Today is a new day. I prayed a mothers prayer. We began our devotion time with reviewing the fruits of the spirit. We discussed not just what they are, and what they mean, but how we can apply them. I am not relaxing rules. Time outs no longer work….we use something else….I am not compromising. I am not negotiating. I am offering lots of hugs. I am confirming rules with scripture. I am loving my children. I am praying with them. Today I marveled at my daughter as she twirled with a giggle in her ballet class. I gave a prayer of thanks for His provision for the class. I gave a prayer of thanks when enforcing a book choice and my sons hard heart melted and he offered a wonderful narration of what he read.

I am and have been a daughter, grand-daughter, sister, friend, daughter in law, working mom and so much more. Most importantly I am a wife and mom. Specifically, a stay at home, home educating mom….Sometimes it’s hard. Sometimes I overflow with joy. Sometimes I think I’m in totally over my head. All the time I know it’s the hardest job I have ever loved! That’s me, being real.

Cartoons I searched out and found on google images I know to be by Todd Wison from Familyman Ministries.  Without my husband I’m sure I’d be a complete basket case. Go dads!!!