I am always looking for ways to add “fun” to our homeschool. After some recent evening television, I had a brilliant idea. You are welcome to join us….(imagine a game show announcer voice) “This is Homeschool Jeopardy!!” 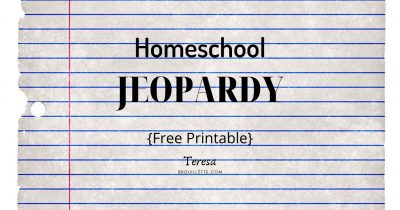 Seriously, my kids enjoy watching Jeopardy and participating from the couch. I usually cave under the pressure of a quick answer, but my husband rocks at the game. I’m amazed at the number of random facts that come out of his head. With a bit of effort, I was inspired to create a Jeopardy-style review game.

I set the game up on our classroom whiteboard. We played with four categories per round, and five questions per category. This could be increased on a larger board. 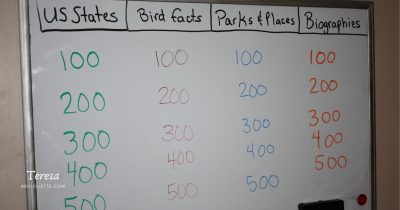 I played the role of host and had the kids pick a number between 1-10 to decide who went first.

Like the TV Jeopardy game, the person choosing had to ask for a category and amount. They would say, “U.S. States for 100.”  I would then read an answer, and they had to buzz in to ask the question.

The host would read: “A gold rush was started in this state when gold was discovered at Sutter’s sawmill in 1848.”

The contestant to buzz in first should answer: “What is California?”

My kids can get really competitive. As we lack buzzers, we had to establish ground rules early on. They had to sit with hands flat on our classroom table. They could not raise their hand until the answer was fully read.

Once I read the answer, the child with their hand up first was called upon. Several times it was hard to tell who had their hand up first, but I had the final word on who was selected. If they gave a correct question, they earned the points assigned to that clue.

With TV Jeopardy, wrong responses result in the point amount to be deducted from a contestants score. In Homeschool Jeopardy I considered each kids’ age and academic knowledge.

We played two rounds of Homeschool Jeopardy and repeated a couple of categories to have enough clues. The third round, or Final Homeschool Jeopardy, required the kids to make a wager. They were told the category of the clue. Each had a small whiteboard, or notebook paper, to write out how much of their total points they were willing to risk. If they won, they earned that much. If they lost, their total points were reduced by that amount.

The Final Jeopardy answer was written out. They each had to write out their question on their small whiteboards. Once everyone was done, they were called upon to show their written response and wager. 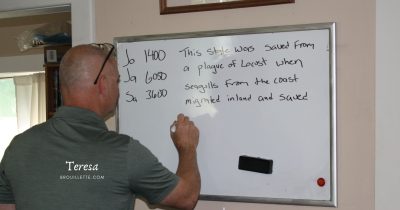 We played the game on an afternoon dad was home. He helped decide whose hand was up first, kept track of points, and gave the final jeopardy clue. With his help, the game went more quickly and it was even more fun.

I’m not going to lie, coming up with all the clues was the hardest part of putting this game together. I pulled out past curriculum and scanned our home library for ideas. In the end, it was really fun to see how much the kids remembered and how they handled the pressure of coming up with a quick response. 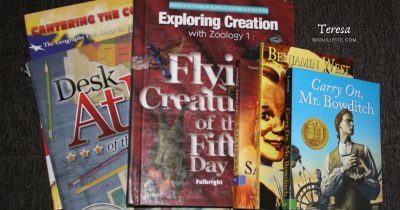 You can create your own Homeschool Jeopardy starting with my list of answers and questions. Add your own clues to fit your kids, and have fun!

Although I have the clues sorted by these categories, make changes to fit your needs. The US States pages have a question for almost every state. Either choose your favorites or create different categories. For example, separate them by regions. If you don’t see your state, please make up a clue. I know I missed a couple.

I read the clues from the sheets, but they could be cut out to create cards. The height size is not uniform, but the cutouts could be adhered to index cards.

This was our first time playing Homeschool Jeopardy, but it will not be our last. It was a really fun way to review what my kids have learned. I will be creating more answer and question sheets for future games. My kids have already requested categories for bible heroes, medieval history, mammals, and more.

If you add clues and new categories for your own Homeschool Jeopardy game, please share them in the comments. I would love to hear what your kids are learning!