After a week of fighting a flu bug, it was a stretch to claim any effort for homeschool, and yet I tried…..pale faced kiddos ready for something productive, presented a question book lesson of “How are stuffed animal made?” 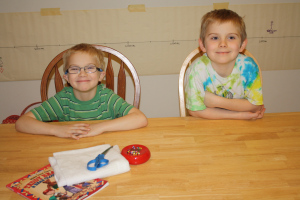 I absolutely love the public library!! No, I’m not dehydrated or totally out of it….well, maybe, but my statement is not. We love the library! We taught Columbo how to use the library computer to find books (umm….yeah, created a monster there….sorry library employees and pratrons at our local branch….just sayin’……beginning reader Magoo is not far behind…..RUN! 🙂  okay, just a warning )    and in Columbo’s library bag was How to make your own Teddy Bears and Bear clothing.

So, flu bug at bay, we tackled how stuffed animals are made. This was, additionally, a great lesson in patience. Given that mom was the last to get sick, I was moving slowly. There was no prep or planning. The kids did not want to read, do math or anything else that “looked” like school, so it was a total spur of the moment event…..

The kids were thrilled to go through my stash of material and make a selection for their stuffed bears. Magoo was the first up in fabric selection and displayed immediate challenges in cutting out his pattern but made a valiant effort!! Columbo was ready to tackle the task of sewing eyes on his bear, and I was really surprised at his willingness to stuff and do a final whip stitch on his bear. Definitely a project we’ll be revisiting as a solo task….

Had this been a planned lesson I probably would have pre-sewn Magoo and Little Bears patterns, but not this day. We cut all the patterns and had the boys sew on their bears button eyes. Magoo poked himself just enough to be frustrated and I did most of his final efforts. I machine sewed the patterns which I felt resulted in a loss of the detail of the bears. Each of the kids “stuffed” their own bears and was so excited for the final outcome!!!!!

Sadly we discovered the bears where far to comparable to the size of our not-so-small puppies squeekie toys and Little Bear had unfortunately left her creation in puppy reach. At days end the puppy had claimed half a button eye and caused some serious mending stitches….what’s a stuffed bear without a few character stitches on the back of the head……. 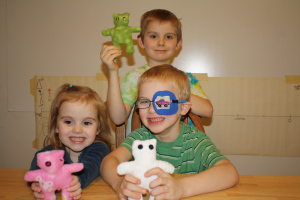