I have been asked several times, by friends and distant family, how my mom’s memorial service went. I know many are simply checking up on me, and some were unable to attend. Thanks to all for your thoughts and prayers.

For those unable to attend, here are the words shared for her eulogy. I have made some minor changes for the sake of anonymity….

As I considered what to share here today, I struggled with how inadequate my efforts would be. How does one summarize a life? My mom was a daughter and a sister. She was a niece and an aunt. She was a wife and mother. She was a friend.

Mom was the youngest of six children and the only girl. I’m confident she was spoiled rotten and well protected. I recall, as a young child, asking her questions about her childhood. She spoke of a favorite dog and ornery brothers. Of her school days, she spoke most often of my uncle G. She had told me that after school, she and G would do homework together. When finished they were allowed to listen to the radio. G was usually done with his homework first. That really annoyed mom. With a spark of mischief, she told me she would complain to grandma that the radio prevented her from concentrating, and he would be made to turn it off. She would laugh at the memory of how mad G would be at her.

Mom never finished high school. She left school only a few months before graduation. Although she had expressed her disappointment over not having a diploma, mom always told me she never regretted dropping out. She left school to marry, and she had told me that if she had waited, her father would not have been alive to walk her down the aisle. That was a very special memory for her. I don’t recall mom speaking often of grandpa, but it was clear she had loved him deeply and missed him. I would guess, as the only girl, she had great favor with him.

I was told my grandparents were not initially excited about mom’s relationship with dad. Oh, my dad was thrilled though. He’d had his eye on the beautiful red-head for some time. Try as he might, he could not get in her good graces. Over and over she brushed him off. It wasn’t until she agreed to go on a double date with a friend that he began to win her over. Dad always said he’d married “up.” He adored mom and would have done anything for her.

When my parents had been married for a while, but had no children, mom suggested adoption. Although dad had been content, he was easily won over. After bringing L home, they were so taken with being parents they later adopted me. I have no memory of not knowing that I was adopted. They had always been open about it. They would simply explain, “We did not just have you, we picked you.”

I think it takes a very special woman to love and raise a child that is not her own. My mom welcomed me and my sister into her life and her heart. Although she was open about the reality that she had not given us life, nobody could have ever told her we were not hers.

We were the picture of the perfect American family. I have very fond memories of being at Granny’s house where she and mom would garden and can. Their work always had to be done in time for their daily soap operas. We enjoyed family gatherings and spaghetti feeds. My cousin J made himself sick on more than one occasion trying, unsuccessfully, to out-eat my dad. We went fishing at Indian Lake and would compete for who could catch the biggest fish or who could cast the farthest. Although mom said she loved fishing, I was confused by her effort. She refused to put a worm on her hook and refused to take the fish off. Dad usually fished close by her and took care of those slimy tasks.

Although our early childhood holds precious memories, sometime in my mid-elementary years a shadow came over our family. Mom had fallen at work and suffered a major back injury. I don’t recall exactly how old I was but I think it was around my 3rd or 4th grade year. Recently talking to L I was sad to learn that her measure of that time is similar to mine. We remember when mom was hurt by when she was no longer there to attend our school events.

When I look back at my childhood after mom’s accident, I have to be careful not to look with my child eyes. Child eyes are like looking at something in your car’s side 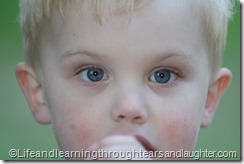 mirror where there’s a warning that images may appear distorted. My child eyes recall feeling hurt, disappointed. Rejected even.

Initially, when mom was hurt, L. and I were sent to family out of town for some of our summer. When we returned the living room was basically moved to our parents’ bedroom. We watched tv and did our homework in their room because mom had to lay down. I was very much a mamma’s girl and had always needed many hugs. Mom could no longer give me a hug without experiencing pain. In the evening, when we watched a family tv show, either L or I would be allowed to lay across the bottom of the bed. We had to stay very still as too much movement caused mom pain. Not one to be still for very long, dad would need to shoo me off. It was several years before medical technology progressed enough that doctors were able to correctly diagnosis mom and perform an operation. By then she had missed many school programs and sports events.

In my child eyes, I can still feel the disappointment of mom not being there. I understood, but I didn’t. Just last week, on Christmas eve, I drove from my home to my mom’s, about four hours, to spend the day with mom as she was ill. That evening my daughter sang with her preschool class at our church’s Christmas eve service. It broke my heart to miss it. As I look at life with the eyes of an adult, a mother, I realize how grieved mom must have been to have missed out on so much.

By my teen years, mom’s health had improved. Although she still experienced pain from nerve damage, she was able to again be more involved in our lives. I for one was terrible! I won’t begin speak of L, but I can tell you I wasn’t always very nice.

Mom had always been one to have a word of advice or direction. As a small child, I remember her saying to me often “here, do it this way….” or “you need to try this….” As mom attempted to be more actively involved in my world, she was met with my attitude and eye rolls.

Mom was an incredibly social person. She would start up a conversation with anyone. I recall many incidents during my adolescence of being mortified when she would engage someone in conversation over the produce at the grocery store. While she was busy talking to a new friend, or enjoying going through the store, dad would be patiently waiting in the car. For her, shopping was not a task, it was an event.

As I entered adulthood and became a mother myself, mom had learned to more creatively give advise. Instead of telling me what I should do, she would begin with “have you tried….” or “can I give you some advice…” Although I didn’t always appreciate her efforts, she wanted to help and be involved. She loved being a grandma and wanted to do all she could to lend support. I learned to appreciate mom and her advice more after I no longer lived close. Oh, but in my pride, I wouldn’t have admitted it to her. We spoke often by phone and I learned how to bring up areas of struggle knowing she couldn’t help herself from passing on some wisdom.

It’s a sad day when the roles of parent and child must change. A day came when L and I began to see signs of dementia. I’m not sure we immediately knew it was that, but mom had become more forgetful and distracted. I remember feeling annoyed by some of her behavior. Driving home from a visit I recall complaining to my husband. He quietly listened and then said, “you know she can’t help it, right?!?” That was the moment. The day when I had to stop looking through child eyes.

After dad had passed, mom visited me on several occasions. We shared our love of shopping, she spent time with my older children, and we enjoyed each others company. As dementia progressed she wasn’t able to travel to me. I went to her as often as I could, and she was always thrilled to have company. Initially, we would spend the day shopping followed by lunch. Later we just went on a drive followed by lunch. Finally, we were limited to just a drive. I began to notice something over the years of my visits. Mom didn’t just like having company. When I would arrive there was a joy in her eyes. I wasn’t just company, I was her daughter. I wish I would have noticed that joy sooner.

Last week, I spent most of my Christmas time at the hospital with mom. I told her I loved her. I told her that she was a good mom and I would remember the lessons she’d taught me. I considered all of those lessons through life. She taught me to love. She taught me that people are more important than things. That time is a precious gift. That a good friend can be met while selecting produce. She taught me how to be strong in the face of pain and trials.

Shortly after my son died, I spoke to mom by phone. It was a time when she was overly clear and lucid. I shared with her the message my son asked our pastor to share at his funeral. He wanted everyone to know that he wasn’t afraid because he knew Jesus. He asked the pastor to share that he wanted to see everyone again and to tell them how to know Jesus. Although mom had attended church, she realized she hadn’t had a personal relationship with Jesus. I was honored to pray with her.

During mom’s final days I reminded her of that prayer. I told her that it was okay to go home to Jesus. I told her that she was adopted. I read her Ephesians 1, where it’s written in verses 4-5:

For he chose us in him before the creation of the world to be holy and blameless in his sight. In love he predestined us to be adopted as his sons {and daughters} through Jesus Christ, in accordance with his pleasure and will.

You see, not only did my mom choose me and L., God hand picked her to be our mother. Through life’s joys and struggles, she has helped us, and our children, to grow into the individuals that we are. Yes, she was a very good mom. From her I have learned that being a mom is the hardest job I will ever love. 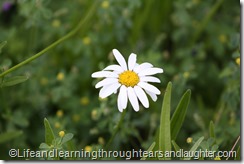