When my daughter was only a few years old, I had a major “uh oh” moment. She had approached me with a gentle smile and big eyes, and quietly asked for a special treat. With only a slight pause, she tilted her head and began batting her eyes. Watching her for a second, her smile became a little bigger and eyes fluttered more quickly. When I asked what she was doing, she responded very matter of fact, “I’m showing you my beautiful eyes.”

I was unprepared for my daughter’s behavior. With a quiver of boys, I was more used to “what you see is what you get.” My boys are rough and tumble kids. Although they can have emotional moments, they are usually quick to deal with it and move on. They don’t care what you think about them tomorrow, if you stop to play today. They live for the moment.

My daughters actions were clearly an effort to get what she wanted through manipulation. She even admitted as much. I’ve never been one to play the stereotypical female games. In fact I’m not really sure I understand how to play them, and rarely recognize when they are going on around me. Oh I know the games exist though. I know because I’ve felt the effects. The sting of hurt feelings, and confusion.

When I sought the advice of a friend with multiple girls, she responded with a knowing chuckle. Her amusement faded quickly as she spoke of how sad it is that not only are we born with this sin nature, but of how young it is evidenced.

As my daughter grows, I have prayed continually for wisdom. My ultimate goal is to teach my children to follow Jesus, and desire to do His will. As I began asking myself “what would Jesus do,” I considered that He never played the games. He rose above them. Further, He did not seek after His own will, but the will of the Father. As I point my daughter toward Jesus, I pray she will learn to seek God and His will for her life.

If you ask for things from life instead of from God, “you ask amiss”; that is you ask out of your desire for self-fulfillment. The more you fulfill yourself the less you will seek God. ~Oswald Chambers, My Utmost For His Highest

Recently I talked to my children about seeking God’s will in our lives, and making correct behavior choices. There have been disagreements between all of them, and each has made choices to pursue their own interest opposed to what might be God honoring.

I asked the kids to imagine God gave everyone a candle. No one candle can burn brighter than another. Each individual could choose how to use theirs. Some may try to blow your candle out in an effort to make theirs burn brighter. Others may put their candle next to yours to make yours burn brighter. 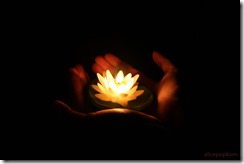 The children caught on quickly and had a lively discussion of how someone might try to blow out another’s candle. They considered hiding their candle so nobody could snuff it out, but then they would have no light. They considered the selflessness and love to make another’s candle burn brighter. In the end, they decided they had to risk their light burning openly, and would need to trust God to relight and repair it if blown out or damaged.

It wasn’t long after our lesson I heard my son and daughter bickering. When my son spoke in a harsh tone, I was delighted to hear my daughter tell him not to blow out her light. To his startled expression, she held up her index finger as an imaginary candle and said, “hey, put your light next to mine, and BOTH our candles can burn brighter.”

I cannot change the hearts of my children. They will experience hurts from others I cannot always protect them from. I pray for them and continually point them to Jesus!! My constant prayer is they find their significance in God, and that they seek His will for their lives! I pray my daughter finds seeking God’s will so much more satisfying than anything she could obtain by playing the stereo-typical games of girls.