Several of my facebook friends have recently been posting about Oil Pulling. Not knowing what it was I sat quietly behind my computer, like a stalker, and waited for an explanation. As information unfolded, I understood they were considering sloshing straight coconut oil around in their mouths for a prolonged period, in an effort to pull bacteria from their mouths and thus whiten their teeth.

I had hopes my friends were going to offer a miracle idea on teeth whitening, but instead I was pretty sure they had lost it. My hopes were based on the reality I am a dentists worst nightmare. I drink coffee, black teas, and if I have a glass of wine it’s going to be red. I do brush twice a day, but have been known to skip that loathsome task of flossing. I’m also way overdue for a dental cleaning.

I couldn’t shake the idea. The more I considered the process of oil pulling, the more I was intrigued. It sounded like one of those strange things my grandma might have done. You know, before some genius invented dental floss. Given we just began researching and experimenting with essential oils, I decided it had to be too strange for someone to have made up. Of course I didn’t tell anyone I was going to try it. I didn’t want them to think I was crazy!

One morning a couple of weeks ago, after my husband left for work, I took the plunge. With all the curtains drawn tightly, I tiptoed  past the rooms of the sleeping children and into the kitchen. I located the coconut oil and took out a teaspoon sized scoop. Figuring I would gag the minute it hit my tongue, I willed myself to leave it in my mouth for at least 30 seconds. Watching the second hand tick by on the clock…..and watching it some more…..I stuck the spoon into my mouth. Okay, did I ever mention I have texture issues? Given the oil begins as a solid and slowly melts, 30 seconds is a really long time.

Fortunately the oil was a liquid in less than 30 seconds. There was really not much of a flavor. It kind of felt like sloshing water around in my mouth. I set the timer for 20 minutes, and picked up my morning devotional reading. A couple of paragraphs and I paused my sloshing to consider what I just read. Natural reflex kicked in and I ALMOST SWALLOWED.  Gross!!! I put down the book and began sloshing…vigorously!

I had no idea that 20 minutes would feel so long, so I turned on the computer. Although I knew the web cam couldn’t possibly be on, I still turned it to face the wall. A little scrolling through facebook, and the timer thankfully went off. I almost spit the oil down the drain, but opted for the garbage when considering that it would probably turn back into a solid. Although the garbage wasn’t full, I emptied it. Whew! Yep, nobody will think I’m crazy…..

I did this two days in a row. By day three I stopped and asked myself “What on earth am I doing?!?” I had absolutely no scientific evidence that I was doing anything medically beneficial. So, on the evening of day three I approached my husband. Given he’s in the medical field there was a slight possibility he might have some knowledge I lack. I asked him simply, “So, have you heard of oil pulling? Some of my friends have been posting about it.”

Not only had my husband heard of oil pulling, but he went on to tell me he had tried it. He explained he’d heard of it years ago and thought it was crazy enough to work, so he tried it with olive oil. He insisted olive oil was so nasty he couldn’t stand it past two days. By the face he made at the memory, all these years later, I believe him! For the record, let me just say I did not laugh…..outwardly….at first. When he seemed interested in my suggestion of coconut oil, I did confess that I had tried it.

What is a crazy couple to do when they need scientific validation for an outrageous idea? Go to the internet of course. We were not disappointed. Dr. Mercola had written an article on how coconut oil might combat tooth decay, and specifically mentioned the technique of Oil Pulling. Although he didn’t mention olive oil as an alternative to coconut, he did say that sesame oil was traditionally recommended. I was further delighted to confirm:

You should not swallow the oil because it’s loaded with bacteria and toxins.

The article overall confirmed that oil pulling is a technique that can be used to reduce plaque and remove bacteria and toxins from your mouth. Dr. Mercola recommended coconut oil for the oil pulling technique, and cited various potential health benefits. 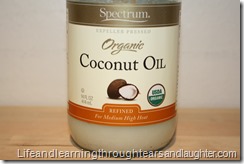 As for me, I am continuing the oil pulling with coconut oil. I begin my morning by sloshing a teaspoon full for 15 minutes. I do not read my morning devotional during that time, nor anything else that requires paused consideration. Once my sloshing time is done, I spit the oil out in the garbage and rinse with warm water.

I haven’t noticed significant change in the whitening of my teeth, but I haven’t given up coffee or black teas either. Overall I hope my hygienist will rest easy knowing I am working to improve my oral health. When I do catch up on that delinquent cleaning appointment, I hope she notices my efforts. I further hope she does not inquire if I’ve remembered to floss daily. Daily? What does that really mean? Do you think she’s counting weekends?