I am always delighted when life events turn into homeschooling lessons. Our most exciting studies are never found in the pages of a textbook. Such was the case one late spring day.

Our day seemed normal, with the exception of intermittent eerie sounds. It was most noticeable in a downstairs bedroom. Initially, we brushed it off and went about our day. We assumed it was something outside the window. By evening, my son was claiming to hear a noise in his upstairs bedroom. Specifically behind a temporary cover to a chimney hole. An old unused chimney that ended in the closet of the downstairs bedroom. Removing the cover revealed we had an owl for a visitor. 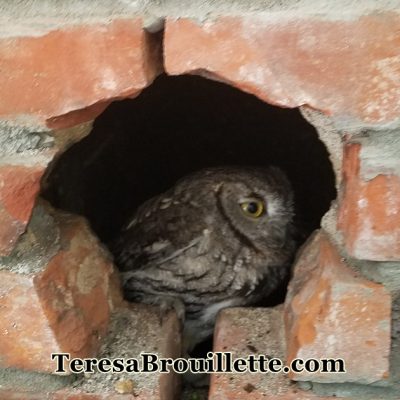 We covered the chimney opening and left our feathered guest alone.  We were sure it would find its way up and out during the night. By the following morning, we learned it was making an extended stay. Over breakfast, my son shared how he awoke around 2 a.m. to a scratching noise. Removing the cover to the hole, he was startled to find a set of very large eyes staring at him. He apparently didn’t sleep well after that.

School books were set aside as our day turned into an exciting indoor nature study. Carefully holding a cell phone into the opening, we took pictures to get a good look at our guest. We discovered not one, but two owls were in our chimney.

Using the free Merlin Bird ID app, by The Cornell Lab, we identified our new friends as Screech Owls. With some online searching, we learned we would need to help the owls find their way out. We removed the cover over the chimney and opened a window in the room.

It was several hours before the first owl ventured out. Seemingly waiting for its mate, it perched on a shelf for quite a while. We didn’t venture into the room, but cracked the door long enough to see if they were still around. By evening, both shy creatures made it out of the chimney and through the open window.

I enjoy how something as simple as owls getting caught in our chimney turned into an all-day nature study. Despite the excitement, my son did not feel amused by a “parting gift” he found in his room. Nature clean up aside, having owls in the chimney was a fun adventure.