I was standing in line with my husband at a social event. A man and two women were chatting behind us when I suddenly noticed a BUG crawling on the mans shoulder. On the freak out scale it was not a HUGE bug. Just the same, I got the mans attention by announcing the presence of the creature while giving it a quick flick.

No sooner had I successfully saved the man from the creeping crawler then he gave an indifferent chuckle. To my husbands amused smirk, I insisted I would want a bug flicked off me. I pondered my actions for a few minutes wondering if what I considered common courtesy was in error. It seems it can be a social faux pas not to mind your own business by letting someone know they have green in their teeth. Maybe a small crawling bug is similar.

On the long drive home from the event, we decided to take a scenic route. Driving back roads that my husband had not driven for decades, and I don’t think I’d ever been on, we enjoyed the absence of traffic. We passed numerous wheat fields, occasional farmhouses, and made only minor detours to take in scenic sites that held some historical significance.

Continuing on an old two lane highway, we came upon a slow-moving truck that was towing a car. Although the road seemed otherwise barren, we slowly followed the traveler up a hill where a lack of visibility restricted passing. No sooner did we crest the hill then the truck driver gave a friendly wave to assure us it was clear to pass. As we returned his wave, I commented how much I’d always appreciated the kindness of country drivers. 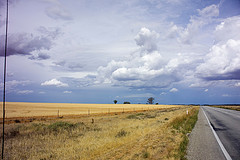 Many more miles down the road, and the passing of more fields of wheat, we approached a group of storage silos. Seemingly in the middle of no where, my attention was caught by a lone leather clad Harley rider. He appeared to be leaving the shade of the silos to return to the road.

Not far past the silos we came upon a cross in the road. My husband quickly pulled off to confirm which direction would lead to the main freeway. As he moved his smart phone around looking for signal, the lone bike rider passed us and stopped at the crossing. He hesitated at the stop, and glance back in our direction several times. After a moment, he turned around and rode back to where we were. He held the look of the stereo-typical Harley biker, in leather and visible tattoos. He held a smile and was genuinely friendly when asking if we were lost. He confirmed the route we needed to take before driving off in the opposite direction.

As I reflect on the simple kindness shown by the traveling strangers we encountered, I cannot help to consider the direction I often quote to my children.

So in everything, do to others what you would have them do to you….Matthew 7:12

So my friends, if I ever notice a bug crawling on your shoulder, I will not hesitate to flick it off. I will be a helpful stranger when I can help you on your way. Social pleasantries aside, I even promise to tell you if there is something green in your teeth. I hope you would do the same for me.