When illness hits our household, our busy pace is forced to slow. When activities are missed, slowing down is met with resistance.

Recently, a sick Little Bear found herself stuck at home with mom while the boys were off on an outing with dad. No amount of playing seemed to lift her glum spirits, until she came up with the idea to sew. 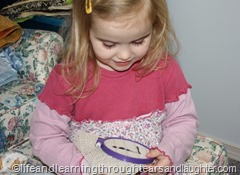 Little Bear was thrilled to have her own sewing project. I put a piece of rubber grip pad in a small embroidery hoop. I drew a letter on it with a marker and she practiced a simple running stitch using a plastic craft needle and yarn.

I took advantage of the sewing room time by patching some hand-me-down jeans. I wanted to make the boys’ old jeans look a little more girlie so I got some inspiration from here when making the patches.

I cut the desired shapes from iron on denim patch material. I cut smaller pieces from cotton fabric and machine sewed them onto the patches using a zigzag stitch.  I haven’t used my sewing machine in a while, and couldn’t get the stitch setting just right. I rushed through the project, so no zooming and judging my work!!! (you just clicked on the picture, didn’t you!?!)

Once the patches were complete, I ironed them onto the jeans. I finished by hand stitching around the outer edge of the patch using embroidery thread in a coordinating color. 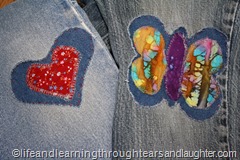 Little Bear is often looking over my shoulder when I sew, so she was quick to assume a supervisory role. With her assumed authority, she insisted I finish a project she discovered still in pieces. It was like an incomplete puzzle to her, and she just couldn’t stand it! She was thrilled to learn the pieces would make a bag.

I had previously made a simple messenger bag, and liked it so much I had fabric cut to make a second. Little Bear was thrilled to provide her input for the creative flap decor. I have to admit my creative vision had been going in a different direction, but I can now say I have embroidered on corduroy. The hand applique was also a first for me, so don’t zoom the picture and just judge with grace. (you just clicked the picture again, didn’t you!?!) 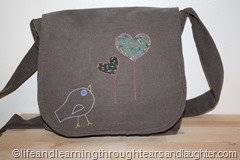 As the day concluded, the boys arrived home sharing the excitement of their activity. When Little Bear proudly displayed her needlework and shared her days activities, the boys began asking for sewing materials for practice. I think sick days aren’t so bad after all.