Did you ever make a promise to your kids that later caused you to question your state of mind?  I have had reason to question my sanity many times in the last few weeks.

Several months ago, Columbo and Magoo voiced their desire for an additional pet. Initially, I brushed off the idea.  Not only did they persist, but Columbo was suggesting a bearded dragon.  A LIZARD!?!

Despite Columbo’s insistence that a scaly creature would be a perfect pet, he could not tell me how to care for it, what kind of habitat is required, or anything else. He only knew it would be a “really cool” pet to have.

As their petitioning continued, I was sure an opportunity for learning had fallen into our laps. We agreed to let the boys get a new pet if they did some research. We expected them to research a minimum of three animals. They had to gather enough information to present us with their top choices with an outline of the needs of the animals, a plan for their care, and gain knowledge of beginning cost and continued care cost.

The first few weeks, we stopped at what seemed like every pet store in town. Not only did we look at animals and supplies, but the boys gathered free informational fliers on every animal available. Additionally, their library bags were overflowing with all the materials they could find on small pets. Columbo had started to do some research online, but that came to an end when videos and advertisements required excessive parental censoring.

I have to admit I honestly believed the hope of a new pet would fizzle under the task of research. In the end, the boys persevered. They considered the care and cost. They considered their preference of a pet they could cuddle with as opposed to a scaly thing that would just creep mom out.

In the end, the decision was for a guinea pig. In their research, it was learned they are animals that are more content in pairs, so we now have guinea pig”s.” 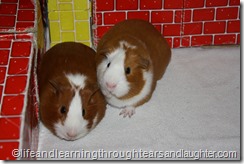 Although my natural mom role in supervising chores now included guinea care, I hoped the initial hands-on assistance would be temporary. Like all great plans, things don’t always go as expected.

Did you know that guinea pigs need an occasional bath but are not terribly crazy about them? Who knew I would ever be able to add guinea pig bather to my skill list!?! 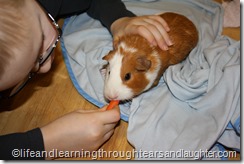 Magoo has learned that Peanut can be comforted, post-bath, with a carrot.

The opportunity for learning has gone far beyond our initial efforts. We have discovered most of the resources we used for cage recommendations and overall care, were outdated.  After much of my own online searching, I’m thankful to have found a blog about guinea pigs called Cali Cavy Collective. With a thorough search of her resources, we’ll be shopping for materials for a new and better guinea pig habitat that we can build ourselves. 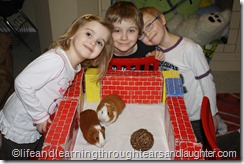 In the meantime, the littles are enjoying creating areas for the guinea’s to exercise. Although the boys admit it has been more work than they had expected, they wouldn’t trade the cuddly little creatures. A kid has to love a pet that will help them eat their veggies.