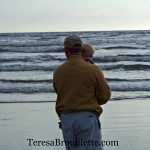 His face reflected such deep concentration as he bent over the small paper leaf, gripping his pencil too tightly. He’d just learned a new cursive letter and insisted he could write out what he was thankful for. With satisfaction, he announced I could put his leaf on the thankful tree. As he held it up for me to read, I couldn’t help but notice a hint of sadness in his eyes…

It had been a day like any other. My husband had gone off to work and I had a busy day of homeschooling lessons. Our studies were a bit longer as it was AWANA night and the littles wanted to make sure they had memorized as many scriptures as possible. More importantly, I made sure they understood the meaning of each scripture.

After dropping the littles off for their evening, my husband and I enjoyed coffee and a short period of uninterrupted conversation. Yes, it seemed like a normal day.

When we picked up the littles, we realized something was not the same. Both boys emerged from class upset. One over hurt feelings from a friend, and the other over hurt feeling that something had not been handled fairly. There were elevated emotions and tears began to flow. I quietly listened to the unusual behavior and waited. Finally it came out, “…..his dad died….we signed a card for him….mom, his dad died!” I was immediately filled with confusion. Surely not the family we knew. Surely there was more than one friend by this name, but no, they insisted.

As my husband confirmed with volunteers, we were apologetically told of the news. They had not known we knew this family, but we did. We knew this man, father, husband, brother in Christ.

Our drive home was mostly quiet, and my mind was abuzz with shock and memories. Only two weeks before, when picking up our children, we had a lengthy conversation with this man. We were considering winter gardening and he had encouraged our interest by sharing his knowledge on the subject, and so much more….. Just the week prior, as we were speaking to another parent, I saw him enter. He flashed his easy smile as a greeting when I looked up. My husband was facing away from the door, so I gave a nod of hello. As he reached where we were standing, he gave me a gentle pat on the arm before passing by to engage another father in conversation. I smiled thinking how I never saw him give my husband a handshake without also receiving a warm pat on the shoulder. Often he would just pat him on the back and begin joking about looking his age, in a way that only guys dared to joke. The two always enjoying comparing their shared experience of having both adult and young children.

Arriving home and falling into bedtime routine did not lift the hearts of our family. Dad was quick to call a family meeting. We briefly discussed our shock of the news and assured the children the best thing we could do was pray.

As our young family closely huddled together, my husband began praying. My daughter clung to me, struggling with the emotions she did not understand. As praying passed to one of the boys, I looked up. There sat my youngest son. As close to his dad as humanly possible. It was his friend that had lost his dad. His friend that was the same age as he was. He sat, weeping.

I had never seen my son weep as he did. He sat in silence, yet tears streamed down his face. He almost looked to be holding his breath. Forcing silent the sobs that dared to come. “Do you have anything you’d like to pray” I heard dad ask him. This was my little prayer warrior. He always had a heart to pray. He was always ready to lift up a friend to the Lord…. In that moment, he declined. He tried to say “no,” and yet the word,  the sound, exiting him was like a deep groaning.

It was some time before the funeral was scheduled. The service was crowded and my husband and I found seats toward the front of the church. I could see the family clearly a few rows in front of us.

The young children sat close to other family members, and the youngest pressed close to her mom. I noticed my son’s friend. Through the opening prayer, songs of worship and words of grieving friends, he would get up and move to sit with a friend. He looked so unsure of how to process all that was happening, and I wanted to hug him. In the midst of his quiet movements, there were many loving and watchful eyes. As the service progressed, he sought out his mother, and submitted to her comforting embrace. My heart grieved for him and my silent tears flowed.

I marveled as adult children stood and shared their hearts. They spoke of a father that loved deeply. Their raw emotions broke my heart. I could not stop my tears.

I looked upon my friend. I’d met her through our children, and our friendship was still new. A beautiful mother and wife. As a sister in Christ, the bond of family felt so much closer than a friendship that was yet developing. My heart hurt so deeply for her. I found I almost had to hold my breath to force silent the sobs that dared to come. I sat especially close to my husband….

As I looked upon the leaf my son held up, I smiled at his clear script…..dad. I praised his perfect cursive, gave him a gentle hug, and carefully hung the leaf on our thankful tree.
May you find thankfulness in time with loved ones this holiday. Happy Thanksgiving!!