(This post contains an affiliate link. Read my disclosure here)

As a home educator, I sometimes worry about my kids’ academic progress. I wonder if I’m doing too little, or maybe too much. Sometimes there’s simply a subject that is a struggle.

For my son, math has been a challenge at times. Some lessons have come easily, but as he has progressed he’s needed extra help to master math terms and concepts. That is, until we hit the times tables.

When my son began learning the times tables, all math screeched to a halt!! When asked an upper times table problem like 8×4, he would gaze off, pull out his mental white board, and slowly add 8+8+8+8. Despite flashcards, math games, timed drills, practice sheets, and online practice tools, he was not mastering his times tables. I knew we could not advance without a solid foundation in the upper times tables.

For almost a full school year, I struggled with my sons lack of progression. I knew he wasn’t on grade level for math, but I knew he could not successfully move forward if he didn’t master the times tables. He was ready to learn and wanted to progress, but we clearly lacked the right tools. 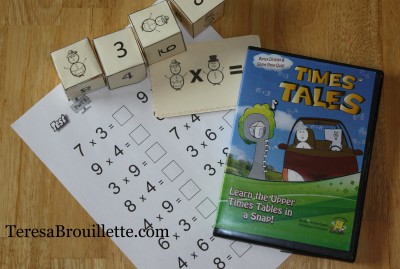 This year we began math with Times Tales. The program uses visual mnemonic stories to help children memorize math facts. Numbers are turned into comparably shaped characters. For example, the number eight is a snowman, the number nine is a tree house, and so on. Initially the student learns simple stories about the characters, and then the math facts are applied to the stories.

I purchased the DVD set, and it included a game show quiz to beat the clock that my son really enjoyed. It also included printable quiz sheets, crosswords, flashcards, and printable game dice featuring the stories number characters.

After watching Times Tales, I was amazed at my sons progress. Math facts he struggled with for most of a school year suddenly came quickly to him. He is enjoying math again!!

Times Tales is a fun and effective system. I would recommend it for any student that is ready to learn their multiplication facts!!